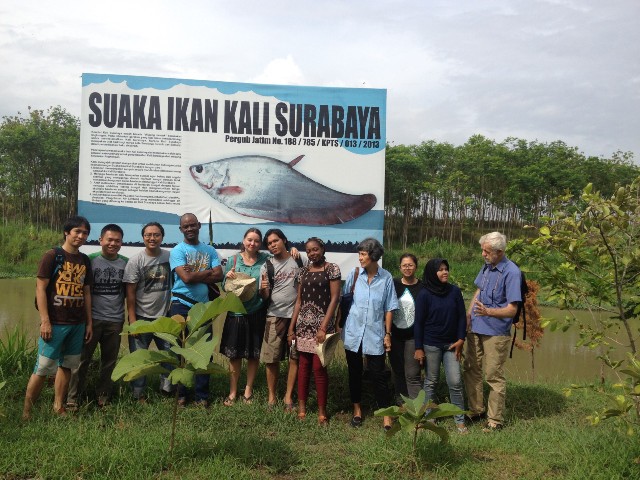 This year it has been ten years since I first met with Prigi Arisandi and Daru Setyorini, those amazing founders of ECOTON. I was immediately taken in by them, and their work. Here was an NGO that committed entirely to preserving rivers and their biodiversity – quite rare in Indonesia at a time when most environmental and human rights NGOs networks mainly focused on deforestation, mining and other land-based issues.

We went hiking in the upstream area of the Brantas river and saw a nice variety of water insects and fish in the clear water. In Wonosalem we visited small-scale coffee farmers who helped preserve the vulnerable soil in the upstream area. Moving downstream, we bathed and drank the spring water at Jolotundo, a beautiful ancient water temple situated in a sacred grove.

Sailing further downstream, we took water samples at the outlets of paper factories and all kinds of small-scale industries. Students regularly join in these monitoring tours, and put black flags to warn the local community if the water is severely polluted. A paper factory welcomed us and showed their improved  water treatment system.

This was clearly as much an activist NGO as a solution provider. Director Prigi Arisandi received the prestigious Goldman Award for his tireless struggle against industrial polluters and holding local governments accountable. And the Indonesian ministry of Environment rewarded ECOTON with the KALPATARU award for for their education program with self-developed, low cost citizen science tools.

Giving local communities a voice in the way the river is managed has always been at the heart of their activities. Along the way, I’ve seen them adopting a broader approach towards government: from community-based research and advocacy to co-developing coordination platforms where local communities are enabled to speak up.

Their Surabaya Fish Sanctuary (Suaka Ikan Kali Surabaya) is an example case of such participative platform. The sanctuary occupies a ten kilometer stretch of the river and is backed by a governor’s decree. Riverine communities, ten village chiefs and ten schools are involved in monitoring the water quality in the reserve. I once attended one of the bimonthly platform meetings at Ecoton’s office in the sanctuary area. Such meetings are open for anyone who has a concern or ideas to protect the reserve. This meeting was well visited by a mix of officials of the regional government offices of Public Works & Housing and Forestry & Environment, small-scale companies, fishermen and riverine communities.

It provided up-to-date information about pollution incidents and their effects on biodiversity and people, and obstacles for small-scale industry to properly discharge their wastewater. The minutes were written on the spot and projected onscreen to ensure approval of the entire meeting – a participatory process in itself.

It is these experiences that make ECOTON such valuable partner in shaping multi stakeholder coordination teams for water quality  management.

I am looking forward to the next ten years with them.